Mt. Colden via the Trap Dike

This past weekend Kolby and I finally made it back up North to the Adirondacks for some good trail running. The Trap Dike up Mount Colden is one of the more technical classic hikes of the Adirondacks, and it has been on the back of our minds for quite some time. We had already climbed up the North, South and East sides of Mt. Colden, and it was now time to do the West.

One of our biggest downfalls during our attempt to hike all 46 Adirondack High Peaks in a week was our nutrition, and we are currently trying to figure out what works for us individually. 46 Climbs last year gave both of us a taste of what it’s like to be an ultra runner, and I guess both of us enjoyed the mental and physical toughness and the determination that the sport demands. Even though our first 40 miler day up the Santanoni’s and Allen was a killer, we both ended the day feeling accomplished and amazed at what the human body is capable of. I guess you can say we caught the trail running bug!

PREPARING FOR THE TRIP: 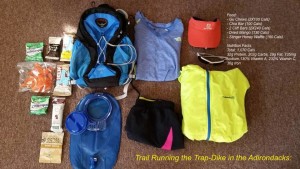 When packing for our trail run to the Trap Dike this weekend, we paid attention to the weight in our packs, the amount of water we were carrying and where we would fill up (streams, lakes etc), and the type of food we were carrying. We aimed to carry over 1,000 Calories in only a few items, while still getting a good amount of nutrients that our bodies need in order to perform. This trip I tried out Stinger’s Honey Waffles, and Chia Bars for the first time. I supplemented these two new foods with some of my normal items such as Cliff Bars, Kashi Bars, Dried Fruit and Energy Chews.

Along with carrying my food, I filled my Camelbak up half way with the knowledge that Kolby was carrying a water filter, and there were several sources to refill along the trail.  As far as the gear I brought, I decided to go pretty light. The weather was forecasted to be dry, partly cloudy and warm. I brought a light rain/windbreaker jacket and sunglasses, and wore shorts, a t-shirt, above the ankle socks and a visor.

Saturday morning Kolby and I arrive at the trailhead at the Adirondack Information Center in Lake Placid, NY around 8am and hit the trail a little bit late (around 9am) due to running into some fellow hikers from Clarkson University.  We headed to Marcy Dam, and then took the trail to Avalanche  Lake. From there we ran around the lake starting on the West side and following the edge of the water until we passed a small foot bridge at the other end. Once there, we followed a herd path that continued along the Lake on the East side, and then took a right up the mouth of the Trap Dike.

The Trap Dike its self was incredible and a little bit scary at times. The Trap Dike has two main types of climbs: a rock scramble over boulders and a rock slab climb. 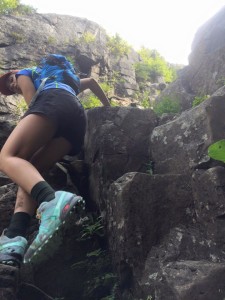 The first part of the climb was the most frightening to me. There were two areas where it’s very critical not to fall, and you’re required to do some scrambling up some almost vertical rock that was pretty close to full-out rock climbing. 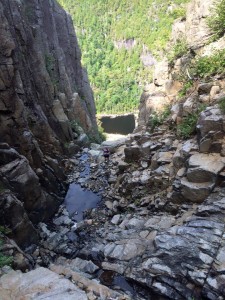 One of the more flat sections; over looking Avalanche Lake

Once we were beyond the first section, we had a quicker and easier climb up the slab. From there we had a beautiful view of the full MacIntyre Range. 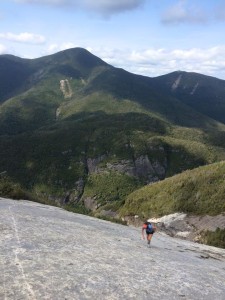 From the top of the slab we took a herd path on the right to the summit and then trail ran down to the trailhead we started at.

Overall the Trap Dike was a great trip, though I would not recommend it to everyone. There are some sketchy areas of climbing that could quickly turn ugly if you were to slip. This hike must be climbed with the right skill-set and weather conditions. If you are planning on hiking the Trap Dike, I advise you not to climb within two days of rain, or right after the season’s snow melt. It is well worth it to wait for a dry patch in the weather patterns to get on dry rock and summit safely.

If you have any questions or would like to learn more about this hike, or other hike’s we have done please feel free to contact me at catherinez@46climbs.com.