We woke up early this past Saturday at approximately 5:00AM ready to get a head-start on our hike of the day. All week long both Kolby and I had been checking the weather forecast for Saturday and were praying that it would change. Saturday was forecasted to have a 30% chance of thunderstorms after 10AM and a 60% chance after 1PM. Still having hope for a sunny day, we stopped at the Mountaineer to check the weather one last time at 5:30AM before heading out to the ADK Loj. Sadly, the forecast had not changed and we made the hard decision to forfeit our original plan of hiking Street, Nye, Algonquin, Wright and Iroquois. Instead we decided that we would scout out Colden’s East slide so we could be on lower ground before 1PM and be back at the Loj soon after. We wanted to scout out the slide because we are contemplating including it in our route to cut off miles during the event. Unfortunately, this route does not have a set path and is extremely steep. 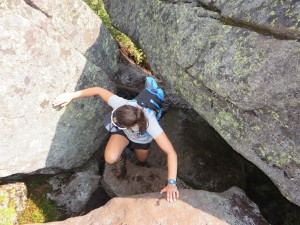 On our way up Colden we found a 6 inch knife and a camouflage bandana. After a short conversation, Kolby and I decided that these items must surely belong to Rambo.

Hiking Colden was quick, we started out at around 7:10 AM and reached the summit at around 10AM, covering about 7 miles. On the way up the North side of Colden there was a false summit at about 4,600ft right after the trail takes a sharp left. From this point there were incredible views of Algonquin and Iroquois. After checking the map quickly, we continued onto the true summit. 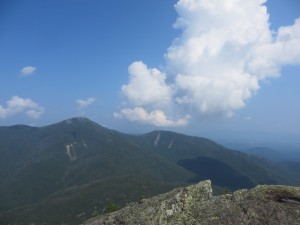 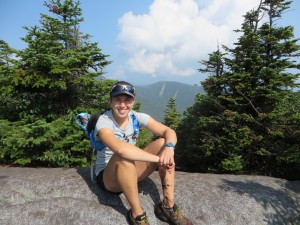 From there we bushwhacked our way to the top of the slide to the left of the summit cliffs. By this point the skies were still a clear blue, and we weren’t in a rush to get back. We took in the views, and started descending. 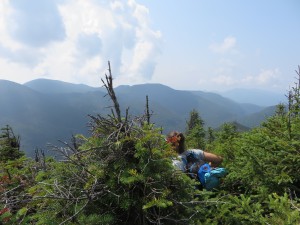 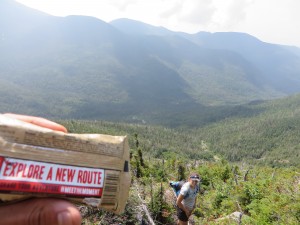 The beginning part of the slide was pretty steep and we had to scramble through it holding on to small holds in the rock and grabbing at roots. After a little bit the slide began to become less steep, but it started to pose another difficulty. Red  algae, alike to what’s found on Mt. Allen, covered most of the slide. When wet this algae makes the rock extremely slick, almost like ice. I actually had a run in with this type of algae on Allen; I lost. During that hike I fell and strained my Rectus Femoris (quad muscle), which put me in pain for 2 months and in physical therapy for 4 weeks. After finding the algae, Kolby and I might reconsider adding the slide to our route, especially if the trails are wet. 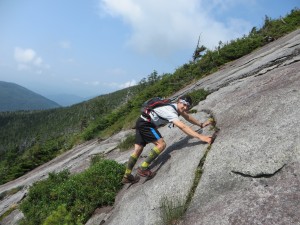 After making it down the slide, we had difficulty locating the herd path, and since we didn’t want to chance getting lost by bushwhacking we decided to follow the brook at the bottom to Feldspar Lean-to. By the time we made it to the lean-to we had ended up wading through the creek and our feet were soaked. Laughing it off, we decided to add on some extra miles and take the round about way to catch some views at Avalanche Pass and Lake Colden.

The views were stunning, and we stopped to take many pictures. At around 3:30 the skies began to cloud over, and we decided to head back to the Loj. We picked up the pace and jogged it back to the parking lot. By the time we reached our car it had started to down pour and thunder.

Thankfully the storm didn’t last too long, and we managed to enjoy some more great views on the way back to our campsite. 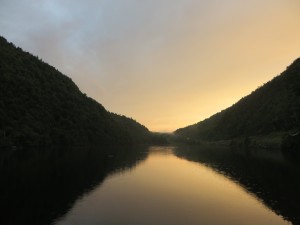 Over all it was a great and relaxing trip. Both of us had a blast, added about 17 miles to our week, and ran about 2 hours. Though this trip was not nearly as intense as ones in the past, it still served its purpose in scouting out the most efficient route for the event.

* We never found Rambo, which is weird because he should have been easy to find without his camouflage!*

Taking the Next Step Missing the Mountains

Our Days are Numbered